The Gold Diggers’ Guild was founded in April 1977 with the purpose to enhance, carry on, and promote the activities of the Southern Oregon Historical Society.  The Guild’s function then and now is both civic and social.  We are non-political, non-sectarian, and non-profit in our policies and activities. 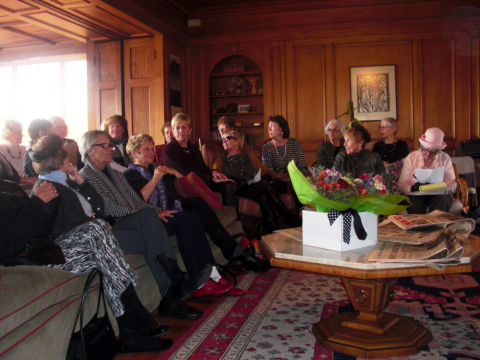 Back in 1977, Bob Heffernan and Mary Hanley got the ball rolling as Mary was no longer able to carry on the tremendous work needed to preserve the museum—the museum was the primary focus at that time.  Women in the community who were willing to give of their time, resources and knowledge were recruited to develop a much needed support group.  Helene Carpenter, Gertrude Henshaw-Drew and Ruth Preston were invited to attend a meeting at Bob Heffernan’s office. The name The Gold Diggers’ Guild was selected because of the connection of the Jacksonville Museum to the Gold Rush Days in Jacksonville and the need to ‘mine gold’ to support Southern Oregon History.

Gold Diggers’ contributed $233,520.41 to the Southern Oregon Historical Society from 1978 through December 2014. The first fundraising project of The Gold Diggers’ Guild was an historical style show using some museum dresses, as well as dresses loaned by various families in the Valley.  It was at the Rogue Valley Country Club.  It was a big success and was intended to be an annual affair.  However, the American Association of Museums notified the Museum Director that clothes donated to museums were only to be displayed in cases and on manikins.  So it was a one-time fun event and other fundraising activities were used over the years.

Since the 1946 Historical Levy Funds are diverted to the country coffers, the Gold Diggers’ Guild mission has been more critical to the operation of the SOHS. Money was donated and many, many hours spent gathering signatures to put the Heritage District proposal on the ballot.  (estimated 45% of signatures gathered were by GD.  No. 1-2 of the signature gathers were Liz Smith 524 and Nancy Hamlin 356).  In spite of their efforts, the proposal was not on the ballot.

Volunteerism has become a major focus as part of supporting various SOHS activities that will generate more funds such as the History Lunch and the holiday events at Hanley Farm.  Over the years, Gold Diggers have given thousands and thousands of hours of volunteer service.

Thank you, Gold Diggers for all your efforts!!!