Skip to content
SOHS#1958.74.5.7, SOHS#2016.1 & SOHS#1987.1.2218
Founded in 1866, the Grand Army of the Republic was a fraternal organization made up of veterans of the Union Army (U.S. Army), the Union Navy (U.S. Navy), the Marines and the U.S. Revenue Cutter Service who served in the American Civil War. The organization was one of the first organized advocacy groups promoting camraderie in local chapters and supporting a variety of causes affecting veterans including education, voting rights and pension programs.
a. SOHS# 1958.74 is a badge from the 9th Annual Reunion of Old Soldiers and Sailors in Ashland, OR that took place between September 10-15, 1900. It features a back, gold apin back and a blue ribbon with gold lettering attached to a round enamel fraternal order medallion.
b. SOHS#1987.1.2218 is a badge depicting an American eagle embroidered on a black velvet background and a gold ribbon with a 13-star American flag attached to a star shaped medal hanging from the bottom. A veteran soldier and sailor are seen shaking hands in front of Lady Liberty and children who represent future generations that were defended. Each point of the star depicts the insignia of a different branch of the Union (United States) Army.
c. SOHS#2016.1 is a badge from the 5th Annual Reunion that took place between August 11-15, 1896 with a gold pin back and a blue ribbon with silver lettering attached to a lithographed picture depicting two veterans shaking hands. Each have missing appendages showing the physical sacrifices made during wartime. 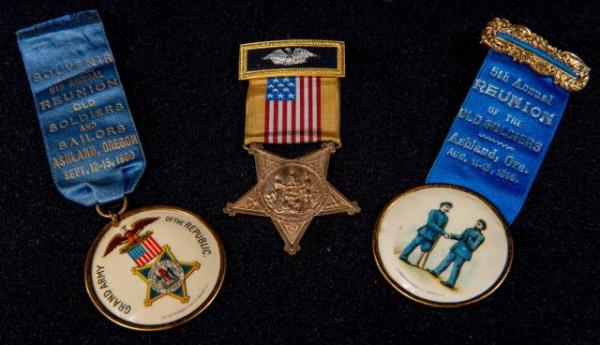